Human-Computer Interaction in Blended Spaces with Mixed Realities and Intelligences

An increasingly blended space of mixed realities and intelligence requires new paradigms for the interaction and communication between humans and technology. One major goal of HCI research is to support humans in using technology so that they can solve their tasks in an effective, efficient and satisfactory way. In this context, the analysis, design, implementation and evaluation of future human-computer interactions play an essential role. As illustrated in Figure 1, in my group we combine methods from computer science (software development, in particular, computer graphics and artificial intelligence), engineering (hardware prototyping, in particular with sensors and actuators for novel user interface technology) and basic principles and models of psychology (such as perception, cognition or action) as well as interaction design (e.g. usability and user experience engineering) to reform the future interaction between humans and technology. The results advance the state-of-the-art in basic research, applied research, and experimental development in the area of augmented/virtual reality, virtual agents and avatars, and 3D user interfaces as well as spatial user interaction. Product development is typically not performed in our group, but in cooperation with non-academic and/or industrial partners. The results can be applied in a variety of application domains such as health, simulation, training, communication, entertainment, education or training. 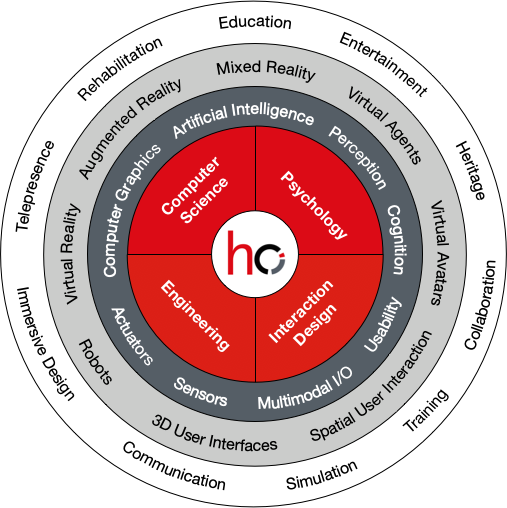 Our group is particularly interested in developing innovative user interfaces for computer-mediated blended realities in which the two-dimensional digital world and intelligence meets human intelligence and the three-dimensional physical world we live in. The figure shows some examples from research project from our group in this context:

- Smart blended agents: We explore the interaction with artificial humans in a blended space in which virtual humanoid representations can affect real-world objects by using robotics and chemical engineering.

- Multi-user interaction in social blended reality spaces: We develop techniques for collaborations and social interaction between humans, avatars and agents.

As a common theme in all of these projects we try to bridge the gap between the semantic differentials of real and virtual, artificial and natural as well as human and artificial intelligence resulting in mixed spaces in which the borders disappear.

A list of different projects including images, videos, and publications can be found here: https://www.inf.uni-hamburg.de/en/inst/ab/hci/projects.html

More about our HCI Vision, Grants, Lab, Projects and Publications.