CoRob is a research project developed in the Knowledge Technology group of Hamburg University funded by CAPES between February 2014 and February 2016.

Persons participating in the project 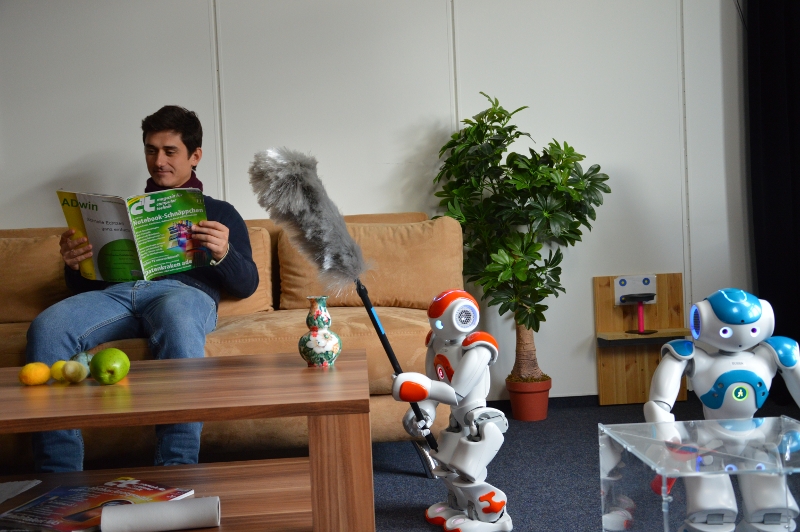 Learning is an important issue in since robots have to accomplish tasks autonomously. For example, object detection in 3D scenes and 3D object labeling are of growing interest as they pose many challenges to the correct recognition, since objects can appear in the scene with different sizes, shapes and colours, depending on the orientation of the sensor in the instant of acquisition and also depending on the illumination conditions.

Also, mobile robot navigation techniques are of utmost importance in domestic tasks since the robots have to explore the environments to achieve their objectives. Learning models can be very effective to help robots acquire knowledge about the environment, for to avoid obstacles. The use of a special neural network called Growing Neural Gas Network (GNG) is interesting, as it relates a position the map with specific neurons of the network.

Depending on the size of the environment the use of a single robot can represent a significant delay, as the robot has to learn about the whole map or about all objects in the scene and also perform the task. The use of multiple robots can decrease the time required to accomplish a task, as each robot would not need to know the whole scene. On the other hand, as the knowledge acquired by each robot is partial, the robots can take inefficient decisions. For example, two or more robots can decide to navigate to the same place or each robot can choose a distant place to clean, which would better be served by another robot. To solve this problem, the robots should create strategies to distribute the workload in the team, using models to estimate the state of the other robots. This strategy allows robots to decisions rationally. Complementary, the partial knowledge in each robot can be combined in some way, as the robots might transfer the knowledge between them.

Summarizing, the CoRob Project will address the following main points: